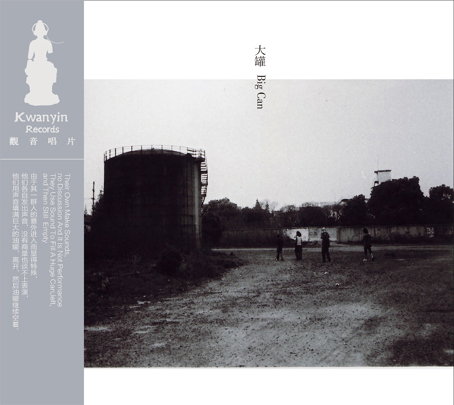 a spontaneous sound event.
April 14th of 2009, they hung out in Zhujiajiao, Shanghai. Some of them made some sounds in an abandon oil can, some not.
Now this big can is gone.

review by Brian Olewnick:
There was this large, abandoned, cylindrical metal object, maybe an oil tank. In 2009, several people cam to the site and made some noise. They were Otomo Yoshihide, Ryu Hankil, Yuen Cheewai, Yan Jun, Sachiko M, Yang Ge, Xian Qiang, Hong Qile, Gogo J, Olivier Heux and Junyuan. The sounds chosen are refreshingly non-obvious, no fist-banging on the interior walls. There are soft clocks and drips as well as a number of sustained sounds–whistling, moaning, keening–that don’t sound voice-derived but perhaps are. It’s also very open, not overcrowded as might be feared from eleven participants. There’s a 27-minute main track then a fun single minute of the troupe waling away…good job.

review by Aquarius Records:
An awesome recording of Japanese and Chinese sound artists – some of whom you should know and some of whom you probably don’t – gathering inside a massive oil container and mustering all sorts of acoustic noises in response to the huge amount of natural reverb within that space. Otomo Yoshihide and Sachiko M are the two big names from Japan, and Yan Jun is the most well known of the Chinese artists, although he’s accompanied by a half-dozen other artists as well. While this might seem like a pretty large assortment of people making a racket inside the giant oil drum, the recording is suitably restrained with many of the bangs, scrapes, and prolonged vocalizations thoughtfully responding to the industrial reverb. It would be very easy to confuse some of these episodes with one of the fictional subterranean realms of Lustmord or Thomas Koner, but here all of that expansive isolationist reverb is in fact recorded live. Cracks of wood upon the thick metal walls give way to a coordinated chorale of sustained vocal bellowing that’s not too far from ritualized chants of the Tibetan or Gregorian variety, with small eruptions, clatterings, and rustlings of various objects presumably found within. When the activities diminish and some chiming metals are struck, the length of the echo seems to last close to 15 seconds before finally decaying to nothing, allowing resonance from outside to intrude. It’s very clear that all of those within the space know a thing or two about improvisation, knowing that shutting the hell up is just as important as making the right sound. But it’s the space itself – the Big Can – that is the real massive presence throughout the recording.

review on the watchful ear 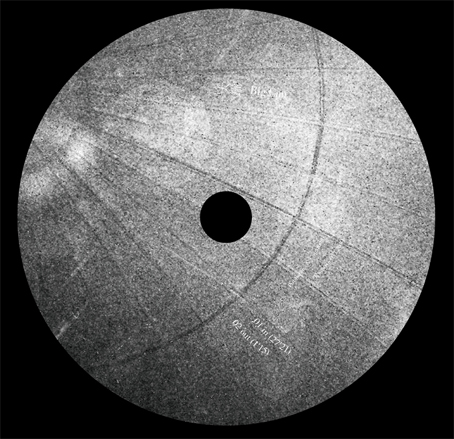